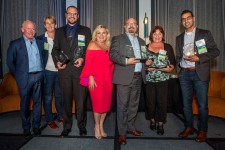 Aura Moore, the Chief Information Officer for Los Angeles World Airports, was selected as the Information Security Executive® of the Year Award winner for the ISE® West Region.

Aura Moore was appointed Deputy Executive Director and Chief Information Officer (CIO) for Los Angeles World Airports (LAWA) in July 2016. She oversees day-to-day Information Technology operations and serves as top technology infrastructure and systems leader for LAWA’s three airports: Los Angeles International (LAX), LA/Ontario International, and Van Nuys general aviation. Moore draws from a public service career of over 20 years at agencies throughout the City of Los Angeles. Her previous positions with LAWA included Network Infrastructure Program Manager, IT Project Management Director and CIO. As CIO, Moore created the Office of Airport Technology and Business Systems, a group tasked with strengthening LAWA’s security, business and airport operations through efficiently delivering large-scale airport technology projects. Within her role as CIO, she expanded her focus to enhancing the guest experience through implementing self-service technologies and establishing partnerships designed to improve passenger processing. Moore is credited with modernizing technology infrastructure throughout the LAX campus, where she consolidated surveillance systems and expanded coverage for enhanced security and safety. She also worked to replace manual processes with new systems that have improved airport operational efficiencies.

T-Mobile’s “Identify, Credential, and Access Management (ICAM)” Project received the honor of being chosen as the ISE® West Projects of the Year.

“This year, our executive and project nominees were some of the most incredible leaders and influencers that our judges have ever seen," said T.E.N. CEO and President Marci McCarthy. "Each of these executives and project teams exhibits the drive, passion, and dedication to Information Security that the ISE® Awards represent. We are honored to have each and every one of them join the ranks of our distinguished ISE® Alumni."

About ISE® Award Program Series
For more than a decade, the Information Security Executive® (ISE®) of the Year Award Program Series has empowered security executives and their project teams to Connect, Collaborate, and Celebrate. Recognized as the industry’s most prestigious IT Security award program, it has become the most anticipated award program for security executives and their project teams. Winners have included executives and project teams from leading organizations such as Aetna, AIG, AT&T, Bank of America, Comcast, Cox Automotive, HMS, Jabil, NCR, PayPal, SunTrust and VISA.